The Glories of Venice - Monteverdi and his world 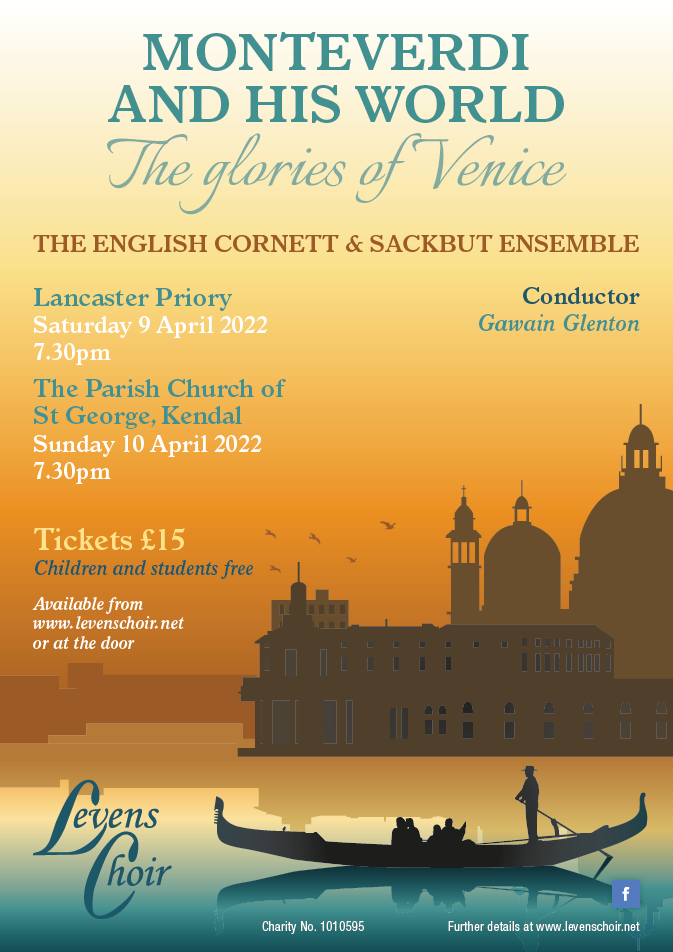 The Levens Choir gave its first two concerts under its new music director Gawain Glenton, accompanied by the English Cornett and Sackbut Ensemble. Gawain is an internationally-renowned virtuoso of renaissance Venetian music and his choice of music reflected his expertise. His focus for these concerts was the work of Claudio Monteverdi.

The opening piece, Domine ad adiuvandum, got things off to a cracking start - a veritable fanfare of voices and instruments with great support from the soloists, one of whom was drafted in at very short notice. The choir was in perfect synchronisation and note-perfect from the off. This piece, part of Monteverdi’s best-known work, the Vespers of 1610, had choir and ensemble in clear understanding and set the tone for the evening.

Then followed Alessandro Grandi’s Nisi Dominus, sung by the soloists with the sackbuts providing fine accompaniment and the choir supporting - a showcase for the expertise of the professional musicians. Monteverdi’s Domine ne in furore gave the choir the chance to demonstrate its skills, providing a lovely round, rich sound, helped by the sympathetic acoustics.

Other highlights included Franzoni’s Sancta Maria, where the female voices complemented the bass notes of the sackbuts beautifully; Gabrieli’s Beata es virgo, which gave the ensemble a vehicle to demonstrate their prowess on these rarely-heard early instruments; and the conclusion to the first half of the concert, Monteverdi’s Beatus vir, which saw the choir pass the text from section to section flawlessly.

Your reviewer was reminded more than once of the Hilliard Ensemble with Jan Gabarek - the way the voices and instruments complemented each other was very similar. High praise indeed.

And so to the second half, where the choir gave us a rich, deep, resonant sound in Monteverdi’s Cantate Domino, followed by his Adoramus te, Christe, a much gentler piece with lovely clear lines from the altos. The Audi coelum featured the tenor soloists in counterpoint from opposite sides of the church. Grillo’s Sonata prima had all seven musicians, with Gawain prominent on cornett, playing with a remarkable agility and lightness of touch.

Then back to Monteverdi to conclude the concert: his Ave Maria Stella showed his characteristic variations on a simple tune and the final Amen was glorious; and finally, the Magnificat primo, which really was magnificent and which featured a fine duet from basses from the choir, drew things to a rousing conclusion. The applause at the end was long, warm and fully deserved.

Overall: the soloists were clearly very familiar with the works, performed well and linked with the choir seamlessly; the ensemble were absolute masters of their craft and played with obvious brio; and the programme was interesting and varied, providing a perfect introduction to the genre for the uninitiated.

And the choir was magnificent. The energy in the choir throughout was obvious - many of the singers had huge smiles - and the commentary from Gawain provided background information which added to the enjoyment greatly.

After nearly 50 years under its founder, Ian Jones, who built the choir’s deserved reputation, the future with Gawain Glenton at the helm looks every bit as promising. Bravo.

The Glories of Venice - Monteverdi and his world

Venice was at the heart of European trade in the 16th and 17th centuries and, coupled with political and religious tolerance, created the conditions for music publication and performance to flourish there. This was the historical background to this evening’s concert which so richly brought to life the music of that time and place.

Covid has been a scourge for choirs and continues to make public performances problematic, with last minute call-offs. That Levens Choir were able to perform to their customary high standard is a tribute to all those taking part, and is a relief to concert-goers, grateful that ‘live music’ is beginning to flourish again. Supported by the English Cornett and Sackbut Ensemble (ECSE) and vocal soloists, and under new choir director Gawain Glenton, we heard some accomplished presentations of an ambitious programme of works by Claudio Monteverdi, Alessandro Grandi and Giovanni Gabrieli, amongst others.

Levens Choir’s ability to remain sure-footed and well-blended even when in eight or ten separate parts is commendable, a testament to their depth of resources, though I was sorry not to see the youngsters that have graced the choir in the recent past. The presence of ECSE and a chamber organ brought a pleasing variety of sound colour to proceedings, the sackbuts conveying a rich sonority whenever they played. The short prayer by Amante Franzoni ‘Holy Mary pray for us’ sung by the sopranos and accompanied by sackbuts was beautifully executed. Performances in thefirst half though, I felt, were somewhat understated, and I was beginning to think that the Lancaster Priory acoustic was affecting the impact of the choir, until the final item before the interval, Monteverdi’s ‘Beatus Vir’, which brought the first half to a rousing conclusion.

This was a foretaste of what followed in a second half full of variety, caution thrown to the wind. ‘Aude Coelum’ from Monteverdi’s Vespers, to which the singing of the two tenor soloists Ian Honeyman and James Savage-Hanford brought an admirable dramatic intensity, was particularly full of energy. The choir resting, ECSE almost transported us to St Mark’s Square. The verses of the hymn ‘Ave Maris Stella’, each framed by ECSE, were serenely presented, with delightful solo contributions not least from sopranos Fiona Weakley and Rachel Little. Monteverdi’s ‘Magnificato Primo’ brought the concert to an energetic conclusion, with fine rhythmic precision and dynamic variation. The tenor soloists’ exchange was again splendid. 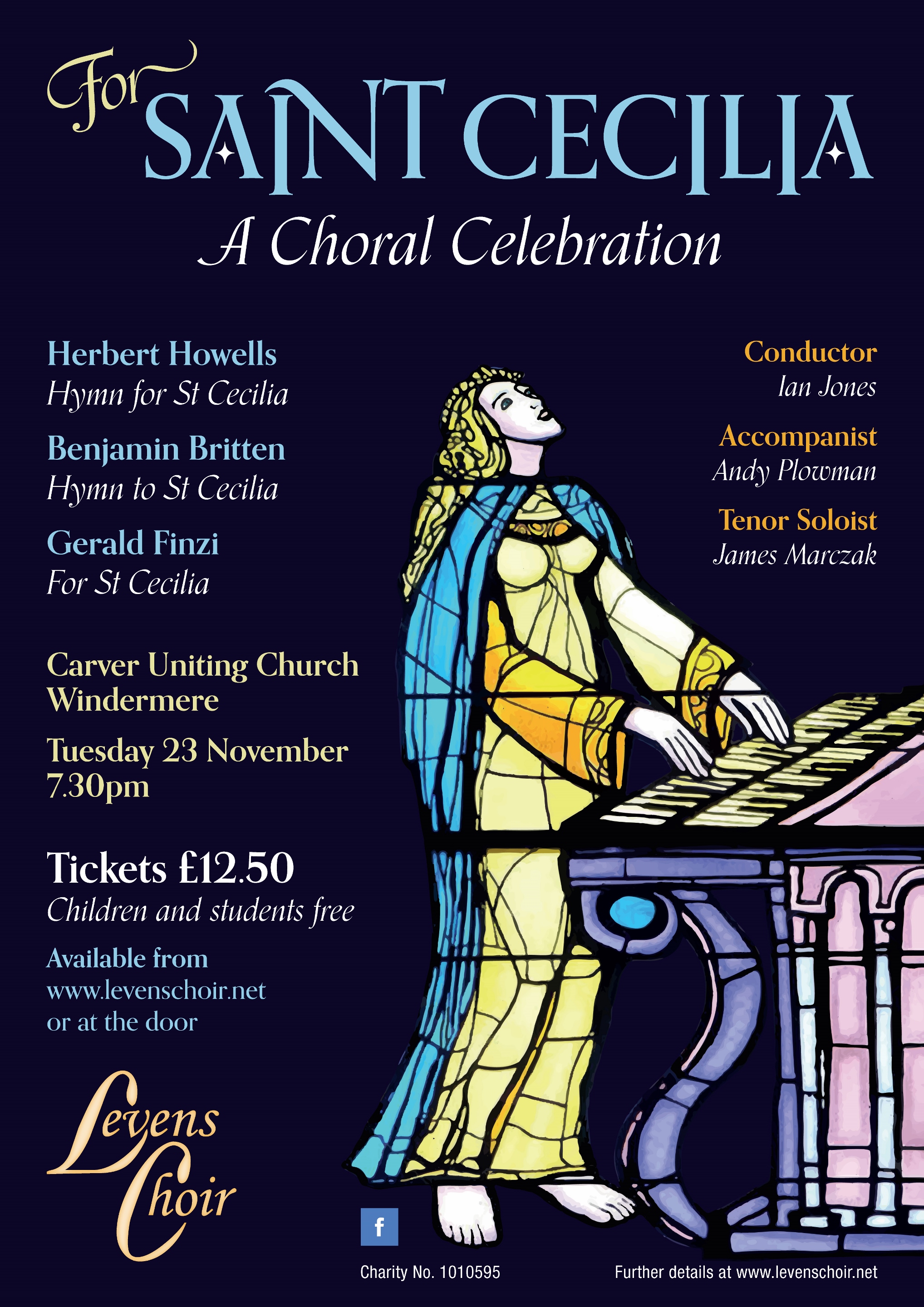 It is good to see local choirs heading back towards some kind of normality, as did Pro Nobis at Cartmel Priory a few weeks ago. Conductor Ian Jones stated that music and the performing arts had been short changed by the Covid epidemic, but the choir were going to help us to re-launch live events. In doing so, they helped us to celebrate S. Cecilia's Day (actually the 22nd). Of course, S. Cecilia is the patron saint of music, and the composition of a number of the pieces in the programme were inspired by her.

Ian Jones, the founder and conductor of the choir, was performing at his final concert. That is a great pity, but it is better to retire whilst still at the top of your game. He had chosen a number of his favourite pieces.  It was Ian who introduced me to the music of Finzi many years ago, and there is a lasting impression.

The concert opened with that great C20th English choral composer Herbert Howells' Hymn to St. Cecilia. Immediately we were engaged by a rousing unison sound in the first verse.

Daughter of another great English composer Gustav, Imogen Holst's unaccompanied A Hymn to Christ was given a firm foundation by the bass line. Coincidentally, this piece was sung the following day on BBC Radio 3's Choral Evensong live from Truro Cathedral.

O Clap Your Hands together all ye people, is a setting of Psalm 47 composed in eight parts by Orlando Gibbons. Like Laudibus in Sanctis by William Byrd later in the programme, could have done with a more sympathetic acoustic, and the execution was closer to madrigal style than English sacred choral music.

In Valiant-for-Truth, music by Vaughan Williams, the part singing was secure, and here again, the basses were the choirs secret strength. The section including 'Death, where is thy sting?' was powerful.

Britten's Hymn to St. Cecilia contains an imitative section, and this was particularly effective.

The only non-British piece was Chant donné by the French composer Duruflé. This is a solo organ piece with sumptuous harmonies played Andy Plowman. It was a very sensitive performance. Andy made the best of a very basic electronic instrument.

Levens Choir commissioned Adrian Self to set Three Songs for Christine, words written by a choir member who had died two years ago. Adrian always writes effective and sensitive music. I particularly enjoyed his 'Thoughts of a Corncrake on the RSPB Reserve, Coll'. The humour was well captured in his music - and the choir appeared to enjoy themselves.

The concert concluded with Parry's My Soul There is a Country in which the chording at the outset took a little time to settle, and some entries lacked unanimity, but Finzi's For St. Cecilia brought the concert to a fitting climax. I must confess that I had never heard this piece before, but the choir sold it to me. After a regal keyboard introduction, the choir took us on a harmonic adventure.

Overall, this was an enterprising and challenging programme, and Levens Choir certainly assisted our celebration of S. Cecilia.
Robert Talbot. 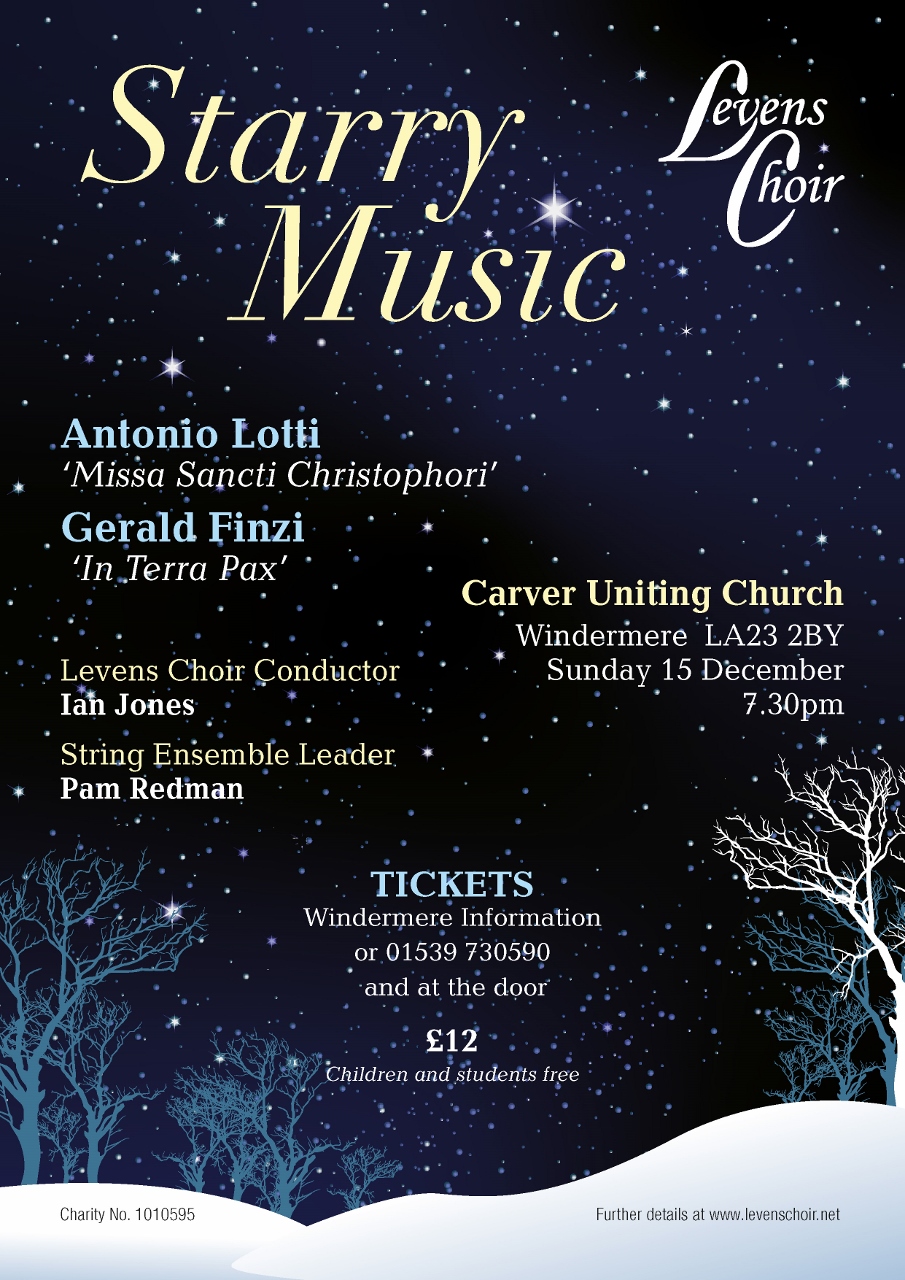 A rare musical treat was unveiled for the audience at the Levens choir Christmas concert. Amongst carols, a string quintet and some seasonal music from Finzi, the highlight of the evening was the Missa Sancti Christophori by Antonio Lotti, a Baroque composer best-known for his 8-part setting of the ‘Crucifixus’ from this work. The Levens choir took on the challenge of this substantial work with spirit and energy, and were ably and sensitively accompanied by the string ensemble (led proficiently by Pam Redman) and Andy Plowman on continuo. The Music Director, Ian Jones, drew out the very best from the choir, with precise articulation and the contrapuntal passages neatly interwoven throughout. The voices were well balanced, with solo parts competently covered by choir members, and careful shaping of phrases ensured variety and interest, with a sustained and full sound worthy of a larger choir. The Crucifixus flowed beautifully despite some initial hesitancy at the start, and all 8 parts moved as one to give a delightfully rich and textured wash of sound. The choir did full justice to this magnificent yet challenging work, and should be commended for their performance.
After some well-chosen carols (including the Stable Carol written by choir member Robert Duffield, a gentle and lyrical piece with some pleasingly complex moments), the string quintet performed the Bax ‘Lyrical Interlude’. This is a very pleasant yet little known work, which reflected Bax’s interest in Celtic culture. The quintet played with cohesion and sensitivity, with players supporting each other to create a perfect balance. There was skilled and controlled playing throughout, with some beautiful warmth of tone in particular from the violas.
The concert closed with Finzi’s ‘In Terra Pax’, which intersperses the poem ‘Noel: Christmas Eve 1913’ with St Luke’s account of the angels’ visit to the shepherds. The choir brought across the solemnity of the occasion well, with soloists Edwin Reynolds and Rebecca Chandler taking the parts of the poet and the angel confidently yet with gentleness and delicacy of tone. There was a triumphant and joyful climax, with the choir skilfully passing passages back and forth to create a cacophony of pealing church bells to proclaim the birth of Christ. This was an exuberant performance, a perfect end to a most enjoyable evening.
Veronica Dunne